Each year Crow Wood Bank wildflowers have become ever more varied and colourful as this summer photo shows, and as autumn advances it is worth looking back to see how it all developed.

After some final flourishes of warm weather we cannot escape the fact that the shortening of the days heralds the onset of winter. The wildflower areas are now looking decidedly tired with most flowers having gone to seed, and it will soon be time to strim all the areas and prepare them for next year’s flowering. The only additional work then needed will be the simple action of raking up the cut material and removing it. This not only stops thatch developing and smothering the overwintering perennials, but it also helps to open up the soil in some patches giving an opportunity for more seeds to germinate. This is the principle management tool that we have used over the six years since the Crow Wood bank was sown with native wildflower seeds in the spring of 2014. The only other control has been the pulling up of Creeping Thistle at around flowering time which significcantly reduces its vigour and helps to stop it taking over the whole area.

The seed mixes that were used in 2014 were either a Scottish mix from the very first Grow Wild initiative featured on a BBC Countryfile programme, or seeds bought from Scotia Seeds, a small company based in Angus that supplies mostly Scottish origin seeds that they grow and harvest on their land. A few seeds collected from some of the same species growing elsewhere in the local countryside were also sown for a couple of further years, either directly, or as home grown plug plants.The aim being to increase the number of some of the plants particularly important for pollinators but also to widen the genetic diversity present.This latter is something that could be particularly important for species whose seeds have limited powers of dispersal, a topic that was discussed in the previous blog.

Looking back at what was sown in 2014 on the Crow Wood area, the different seed mixes together supplied a total of 47 different wildflower species. Of these, 40 have been seen growing somewhere on the area sown. Of the 7 that are not recorded, two require damp conditions, not something that is a feature of the area, and some of the others are either small and insignificant and easily overlooked, or belong to the yellow flowered daisy group that can be hard to identify, so some of the 7 may be there as well. It has however taken some time for all the 40 now present to appear, so when establishing a wildflower area, patience is needed to see all of the flowers that may have been in the seed mixes sown.

In the first year, 2014, the seed mixes sown round the edges of the bank and path had included Cornfield Annuals, so even that first summer saw a colourful display, principally poppies, both there and on the Triangle across the road sown at the same time. 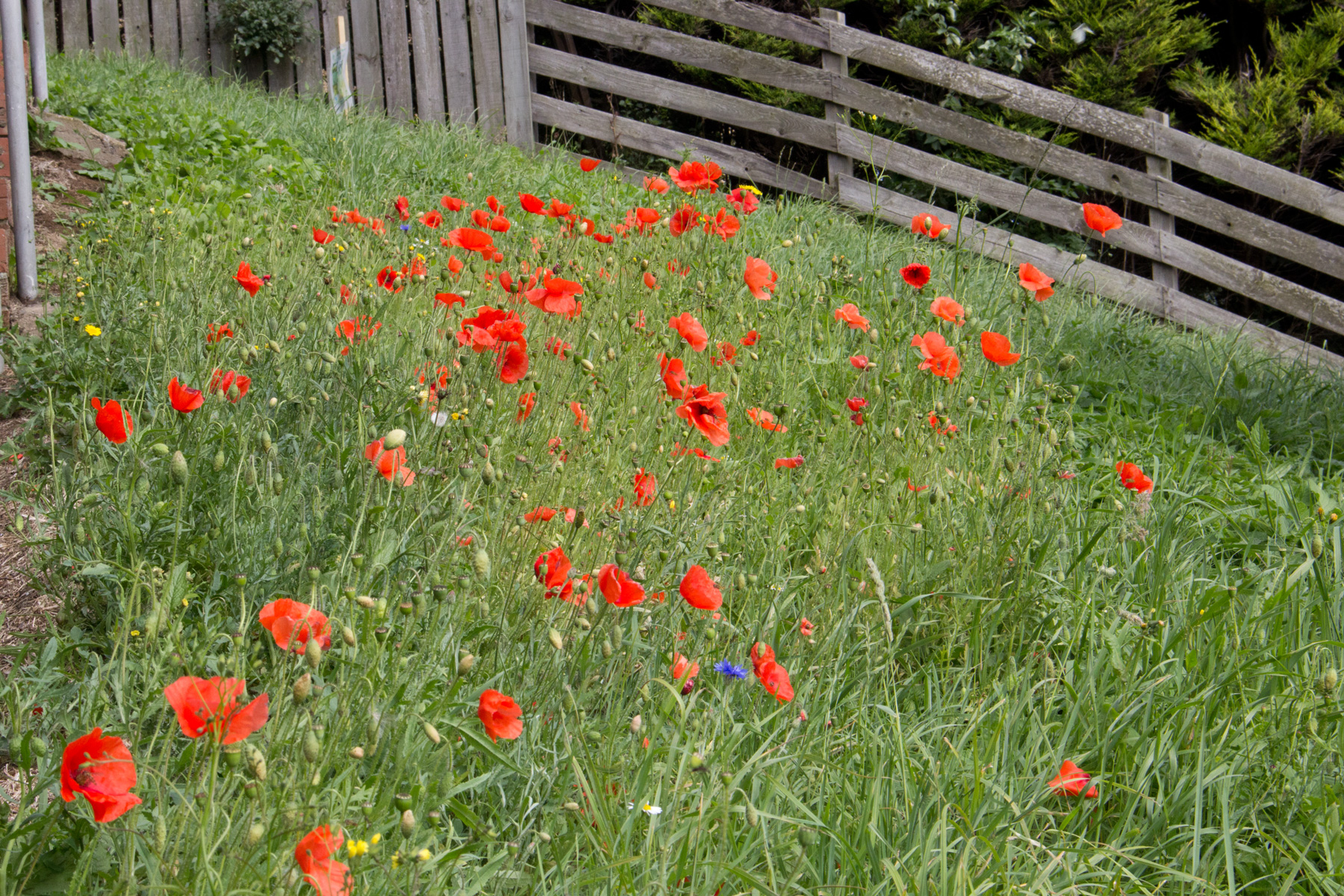 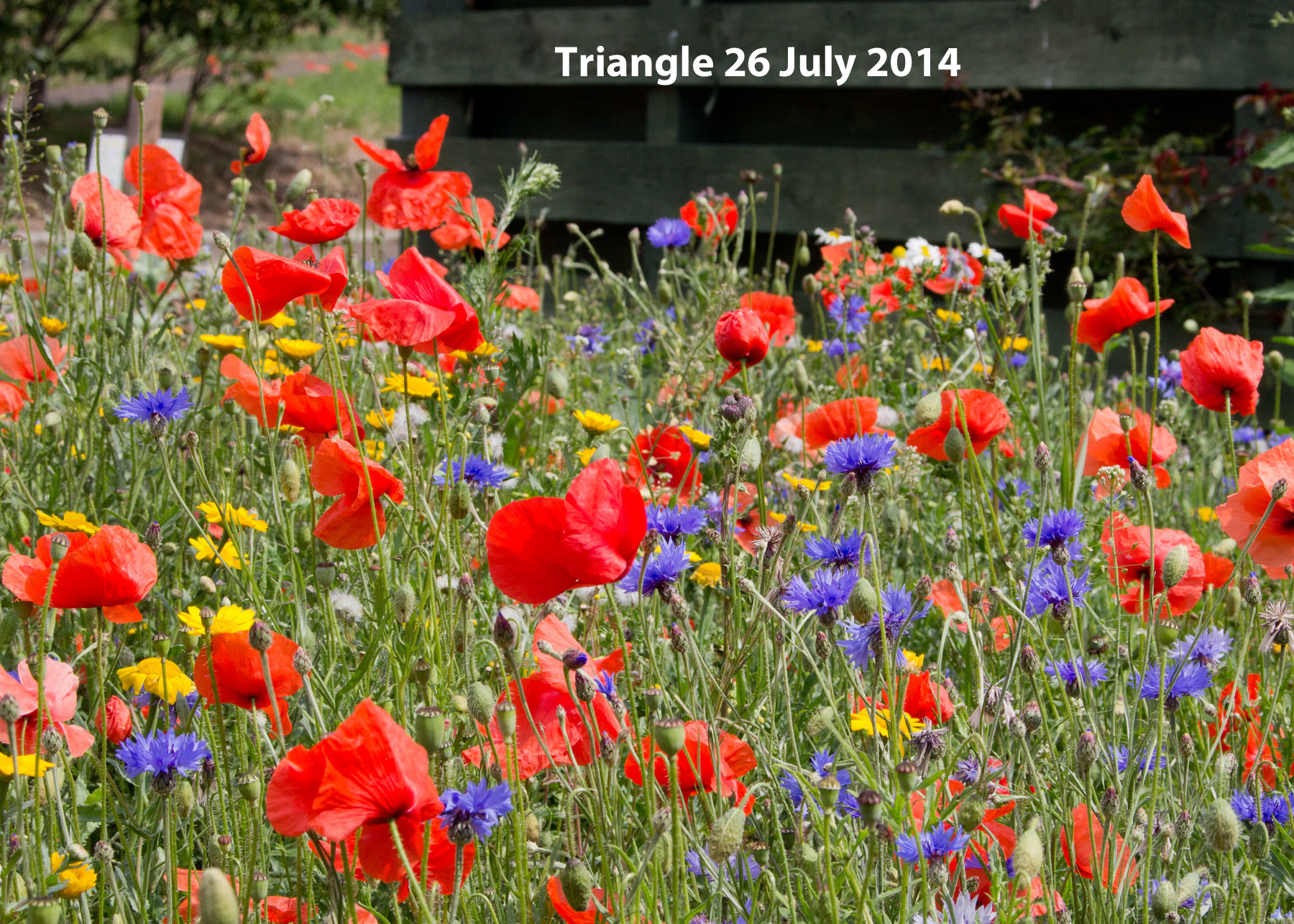 There were still a lot of poppies to be seen in 2015 and they still continue to appear in disturbed ground, but that year some of the perennials and biennials also started to come into flower with lots of Red and White Campion along with Common Knapweed, Oxeye Daisy, Yarrow, Weld, Teasel and scattered Viper’s Bugloss. 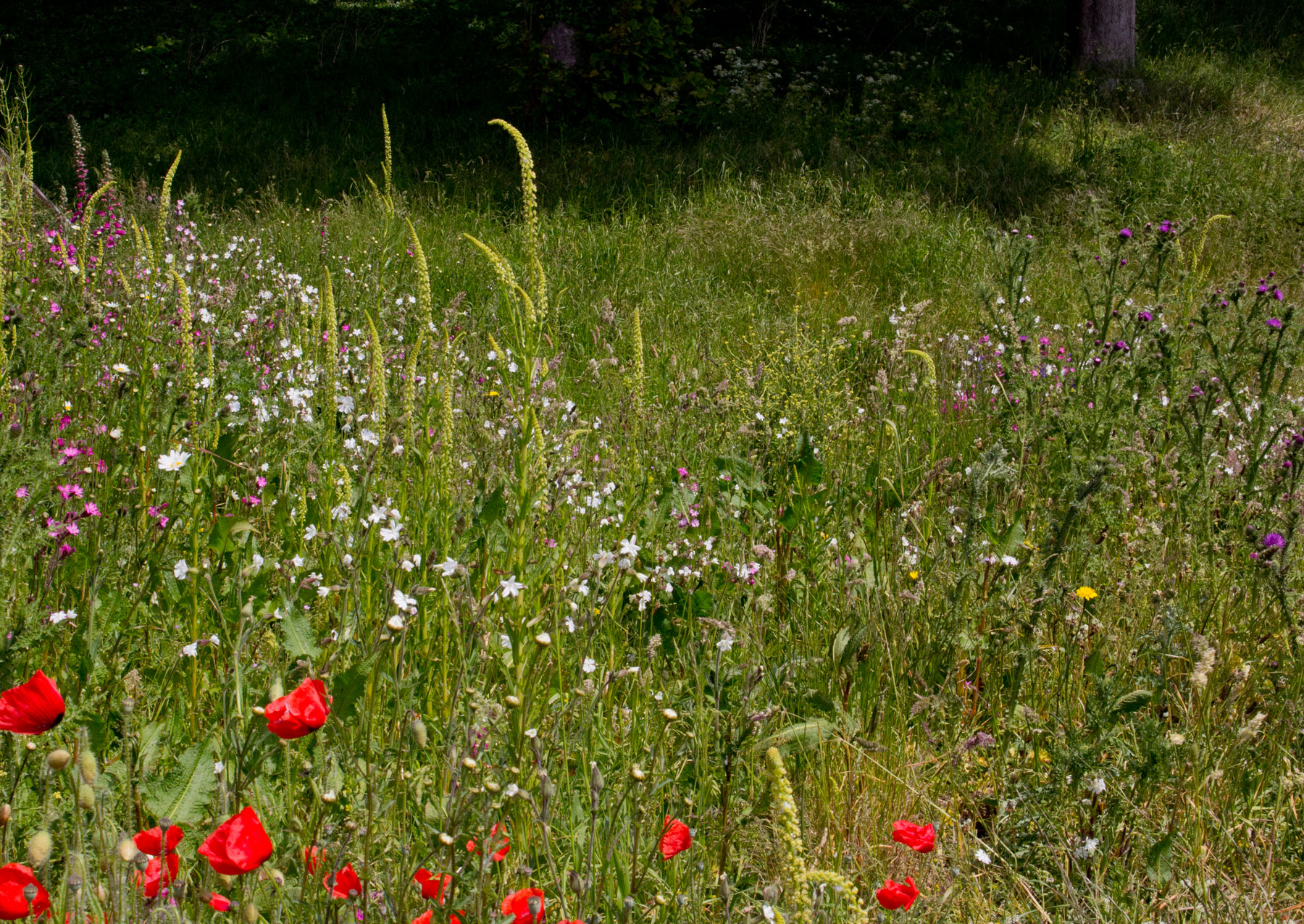 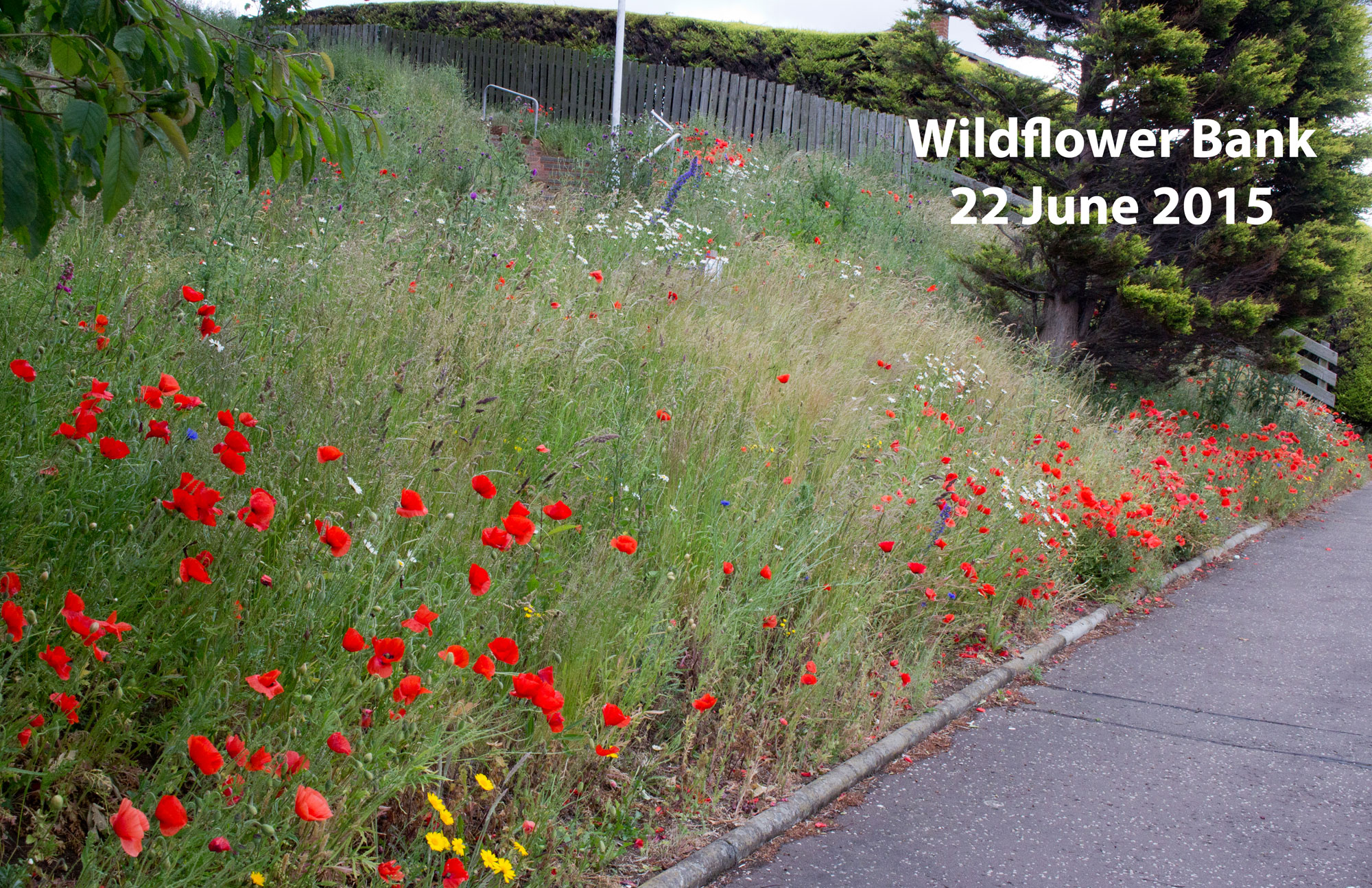 2015 also saw the appearance of Yellow Rattle, especially in the flat ground between the path to Ross Avenue and the wall and this is still the largest patch of a flower that is so important for its ability to reduce the growth of the grasses alongside it which stops them from swamping the adjacent wildflowers

2016 saw Oxeye Daisy dominate flowering on the bank and also on The Triangle, leading us to dig out some of the bigger clumps from the edges. While this may not have been necessary, as subsequent dry summers have seen its vigour reduced, removing it and providing bare soil areas where some plug plants were planted has provided nest sites for one of the solitary bee species that benefit from the abundance of spring wildflowers. 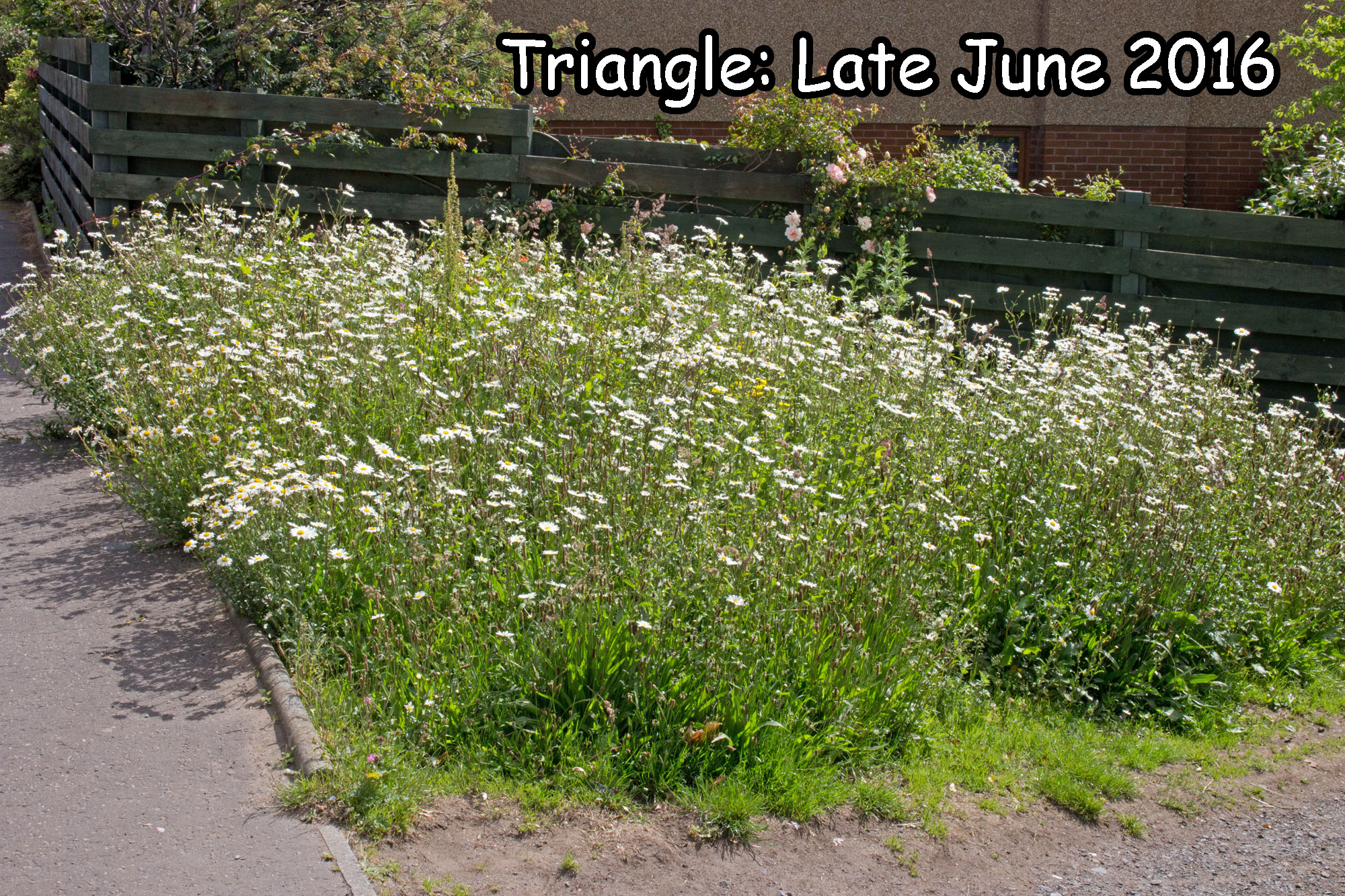 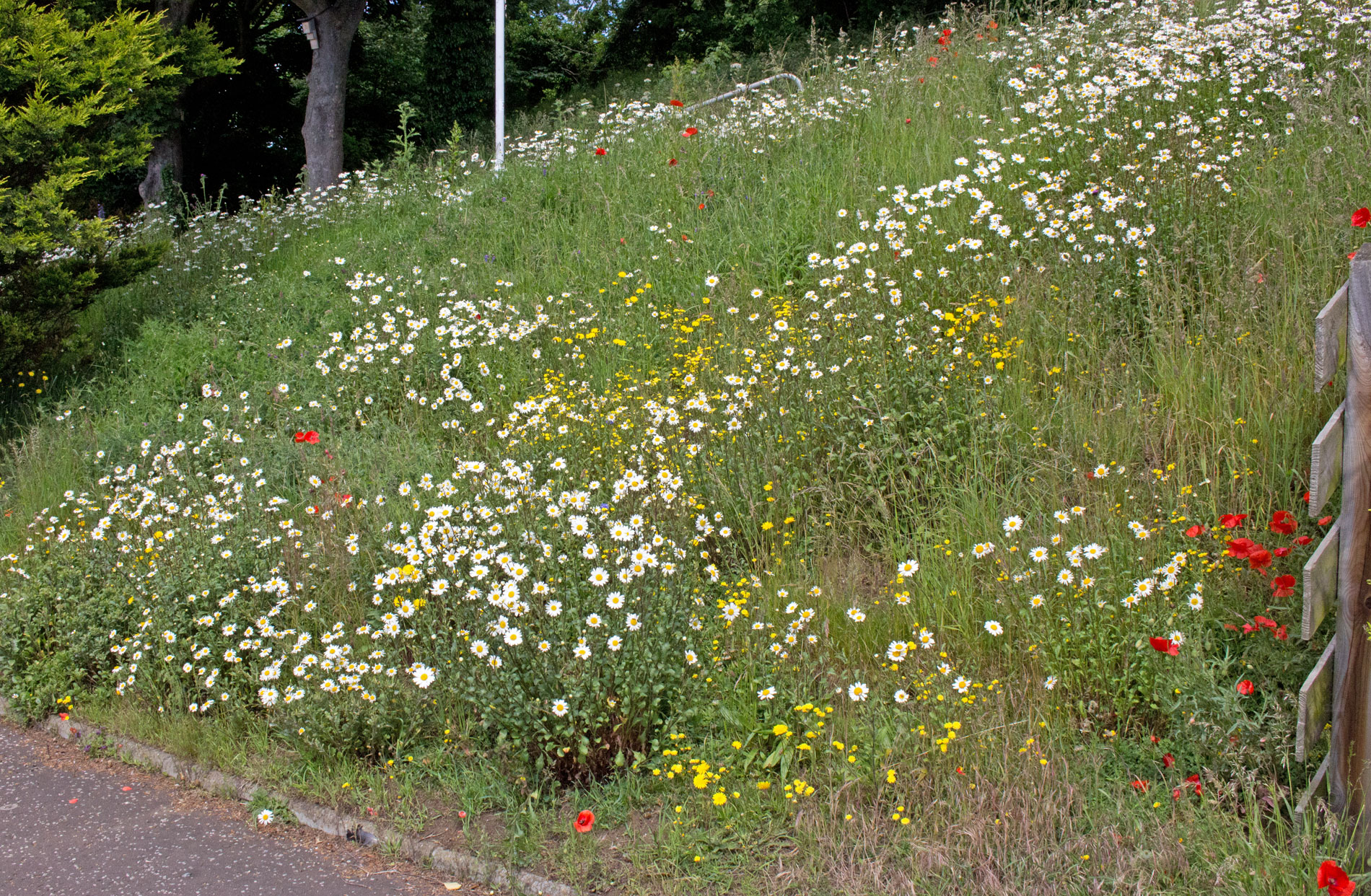 2016 also saw the appearance of the flowers of Field Scabious and Lady’s Bedstraw. 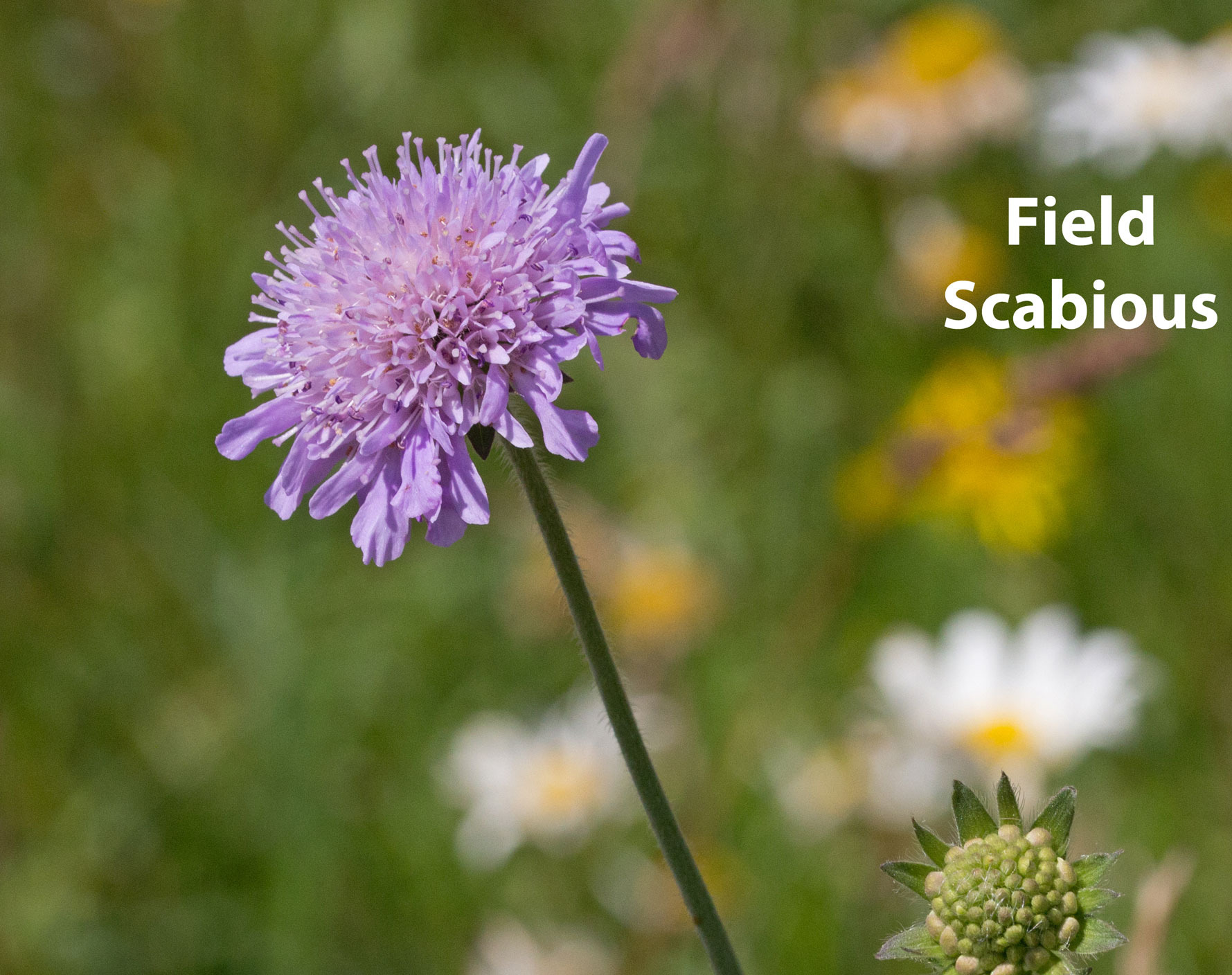 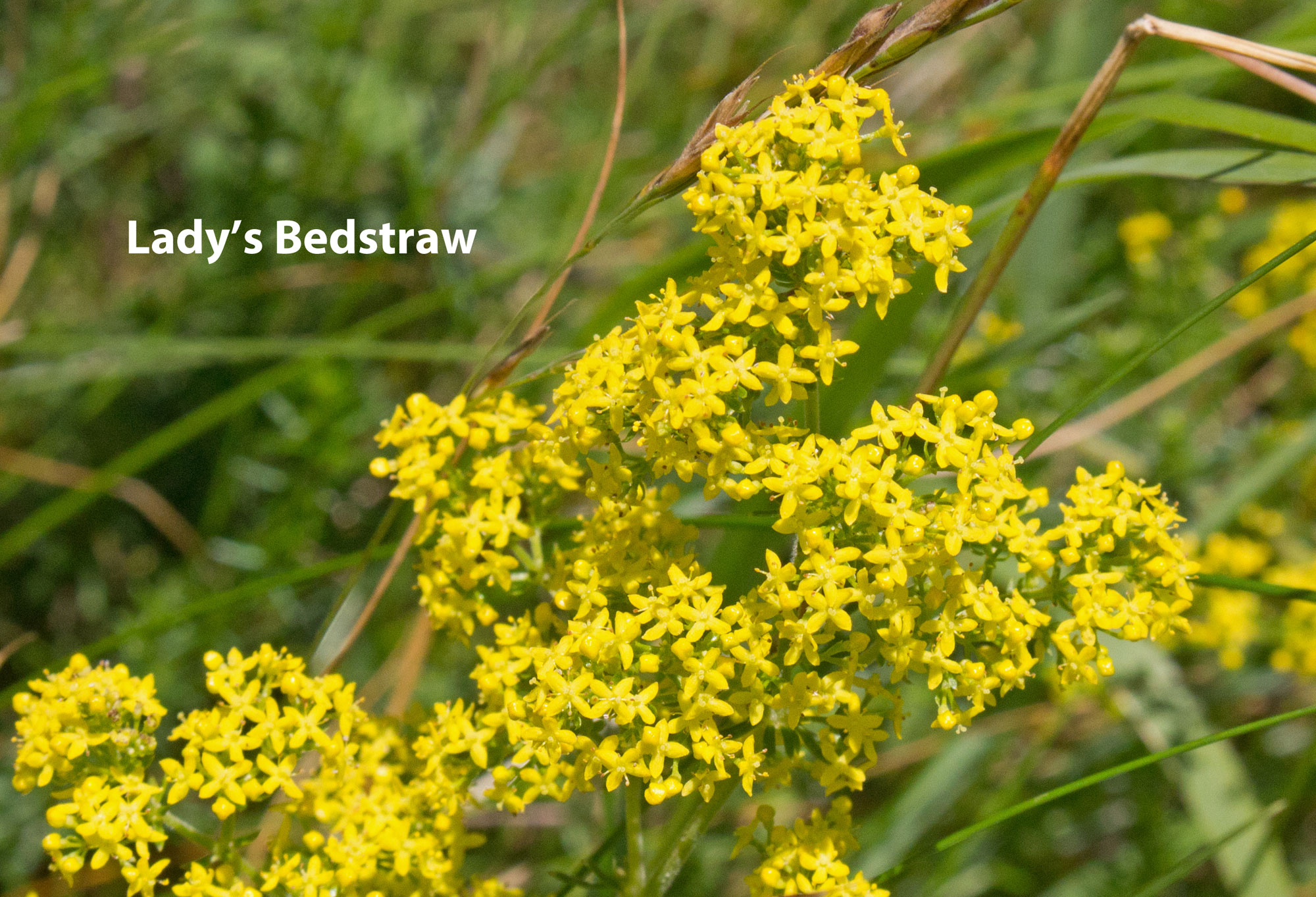 By 2017 all the species that had become established were still to be found, but there were now also a few clumps of Primrose bringing some colour to early spring.

Though small at first the clumps have continued to expand. 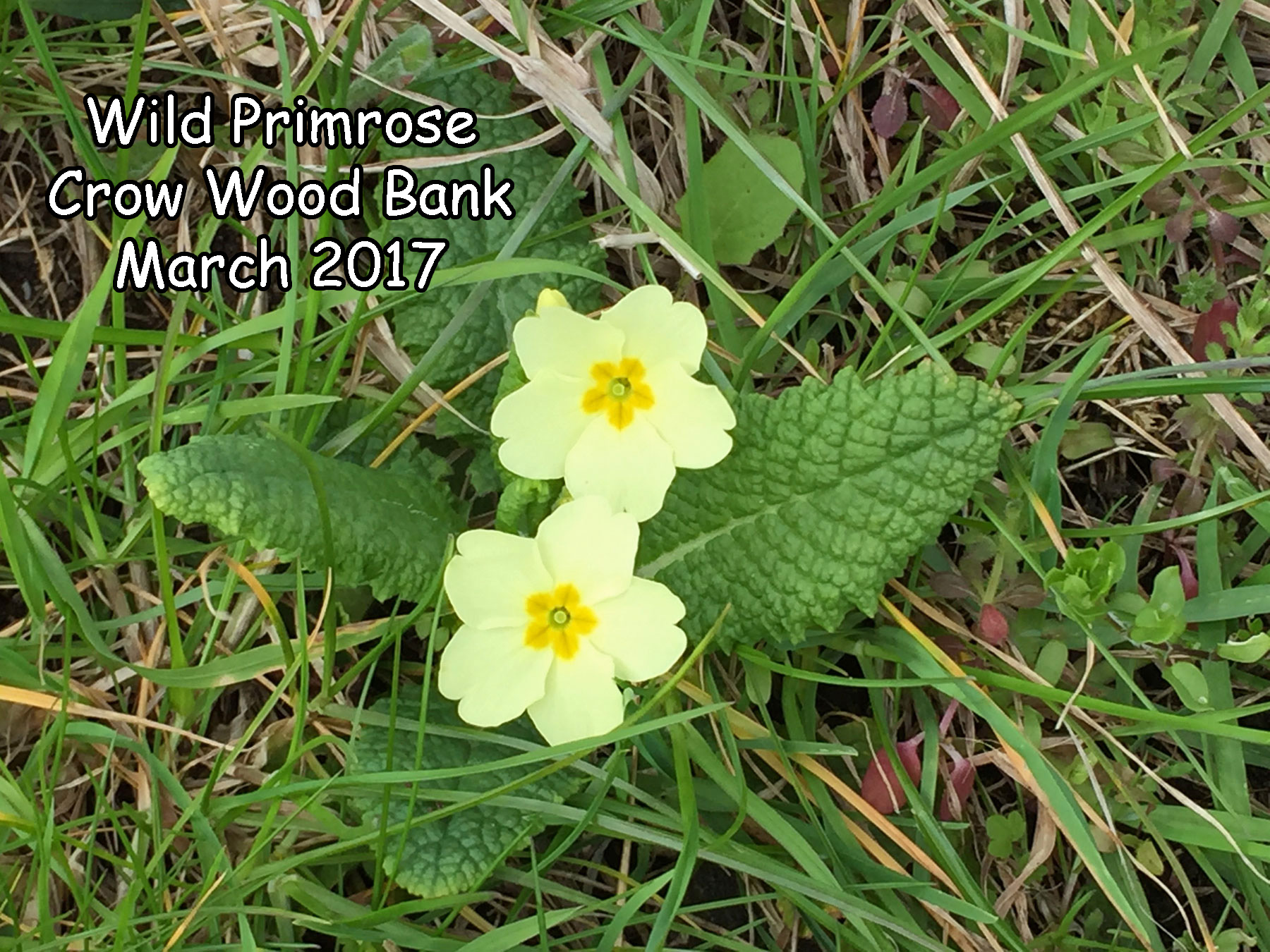 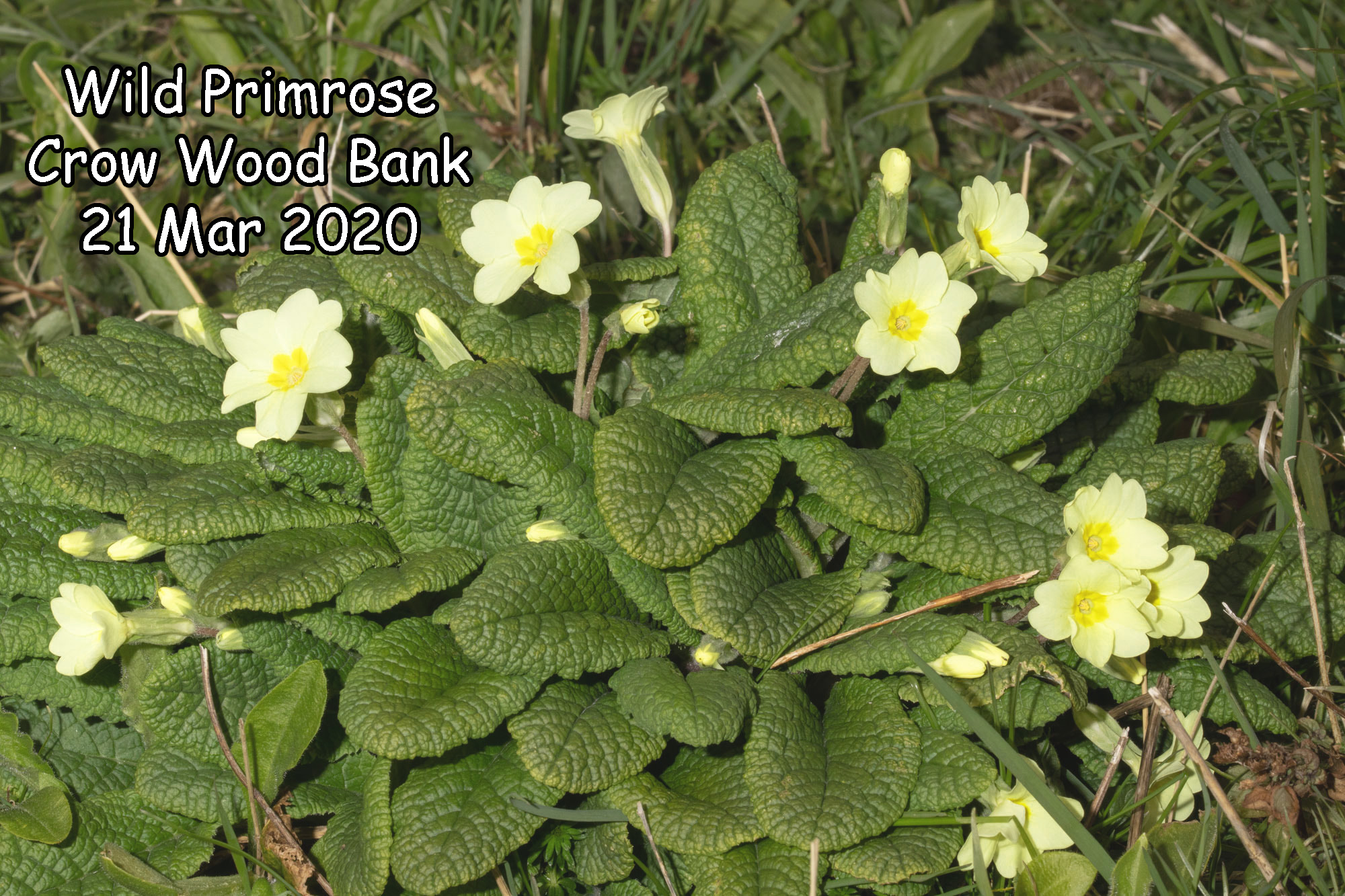 A welcome addition to the diversity of flowers in 2018 was a scattering of Cowslips below the path at the top of the bank adding further spring colour and interest.

In the summer Meadow Cranesbill also became evident, especially in the area where Yellow Rattle was thriving.

Several of the perennials, such as Field Scabious and Common Knapweed form clumps that have increased in size each year and these have been steadily increasing to become more obvious during 2019 and 2020.This has a benefit both for foraging Bumblebees and the plants themselves as there is evidence that having clumps of the same flowers makes it easier for Bumblebees to target them and this improves their pollen and nectar collecting efficiency as well as ensuring adequate fertilisation and seed set for the plant. 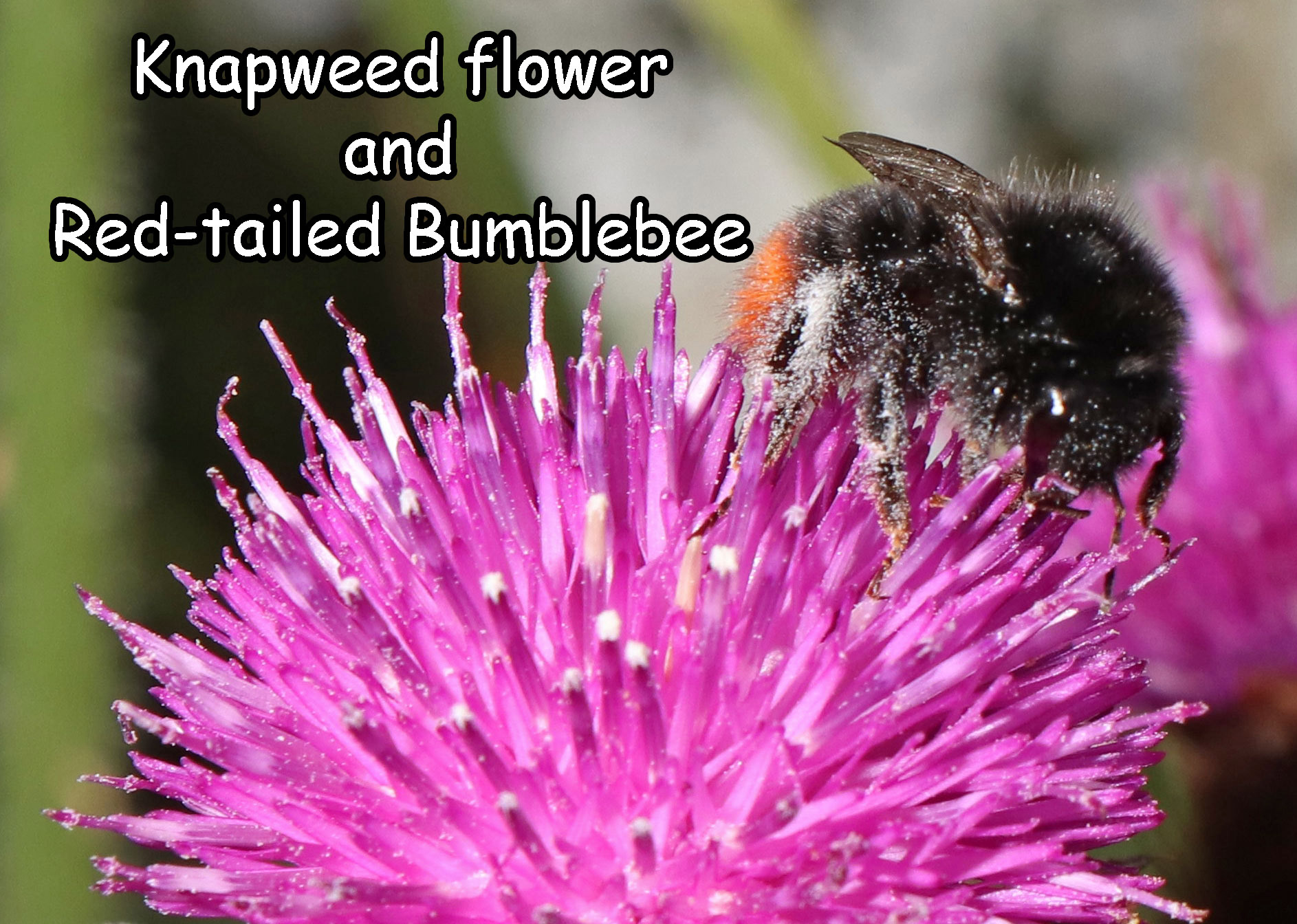 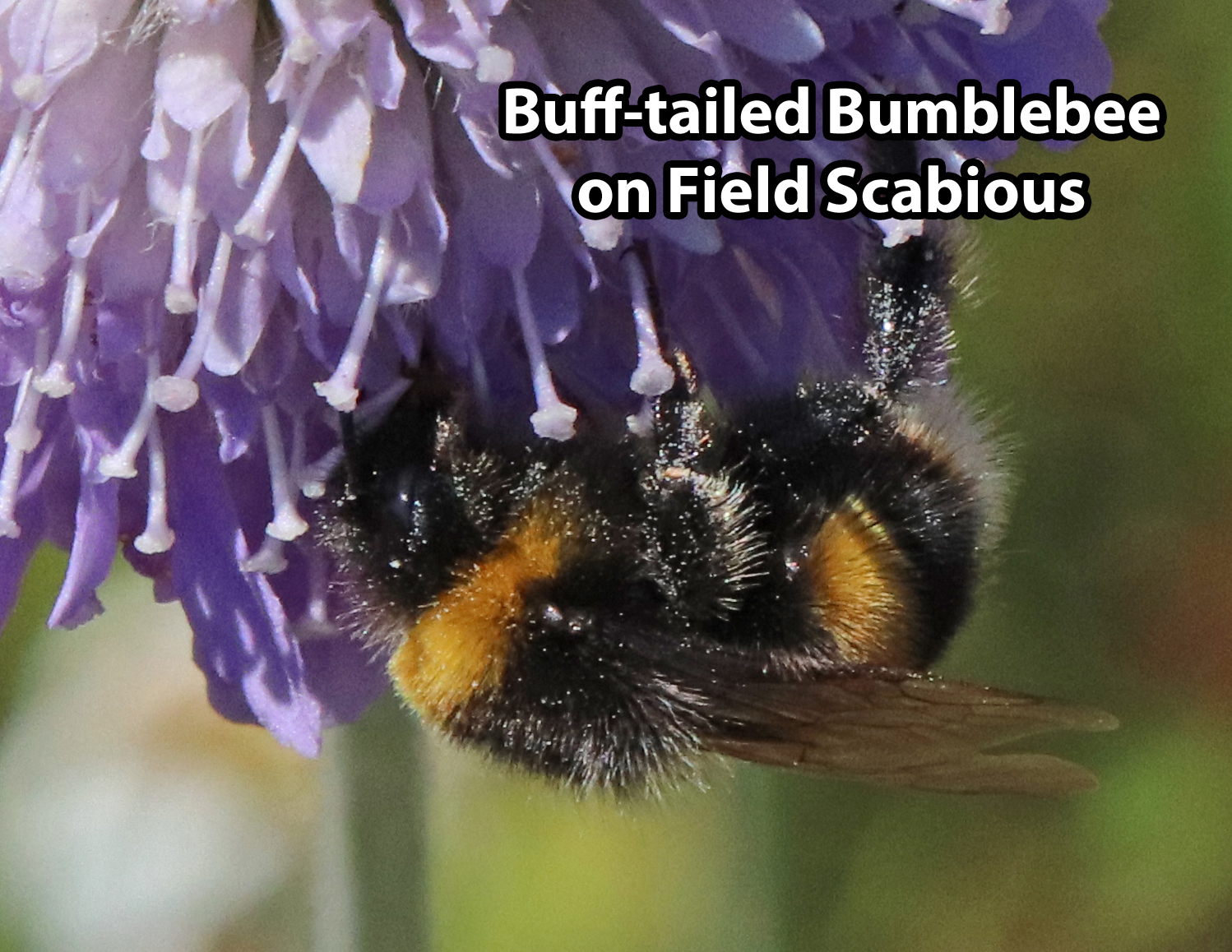 It was assumed by 2020 that all the plants that were going to develop from the 2014 seed mixes had already done so, but a chance to examine what was flowering on the bank in mid-July produced a surprise, with two plants of Clustered Bellflower in bloom, a species that had been included in one of the 2014 seed mixes but had not been evident in previous years

Of course, the wildflowers that have been seen blooming on the bank are not just those from the sown seed mixes, there are also some that developed from seeds already in the soil, or that get blown in from other areas of wildflowers nearby. Although some, like Bird’s-foot Trefoil, White Dead-nettle and Tufted Vetch were also present in some of the seed mixes, having additional plants from a local population helps them to reach abundance quicker and supplies a little more genetic diversity. 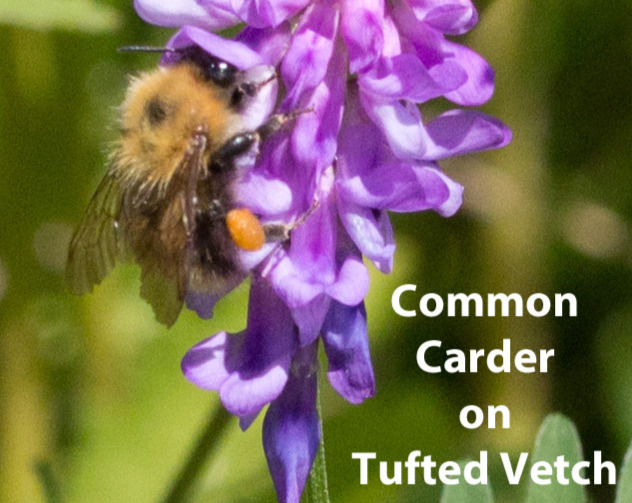 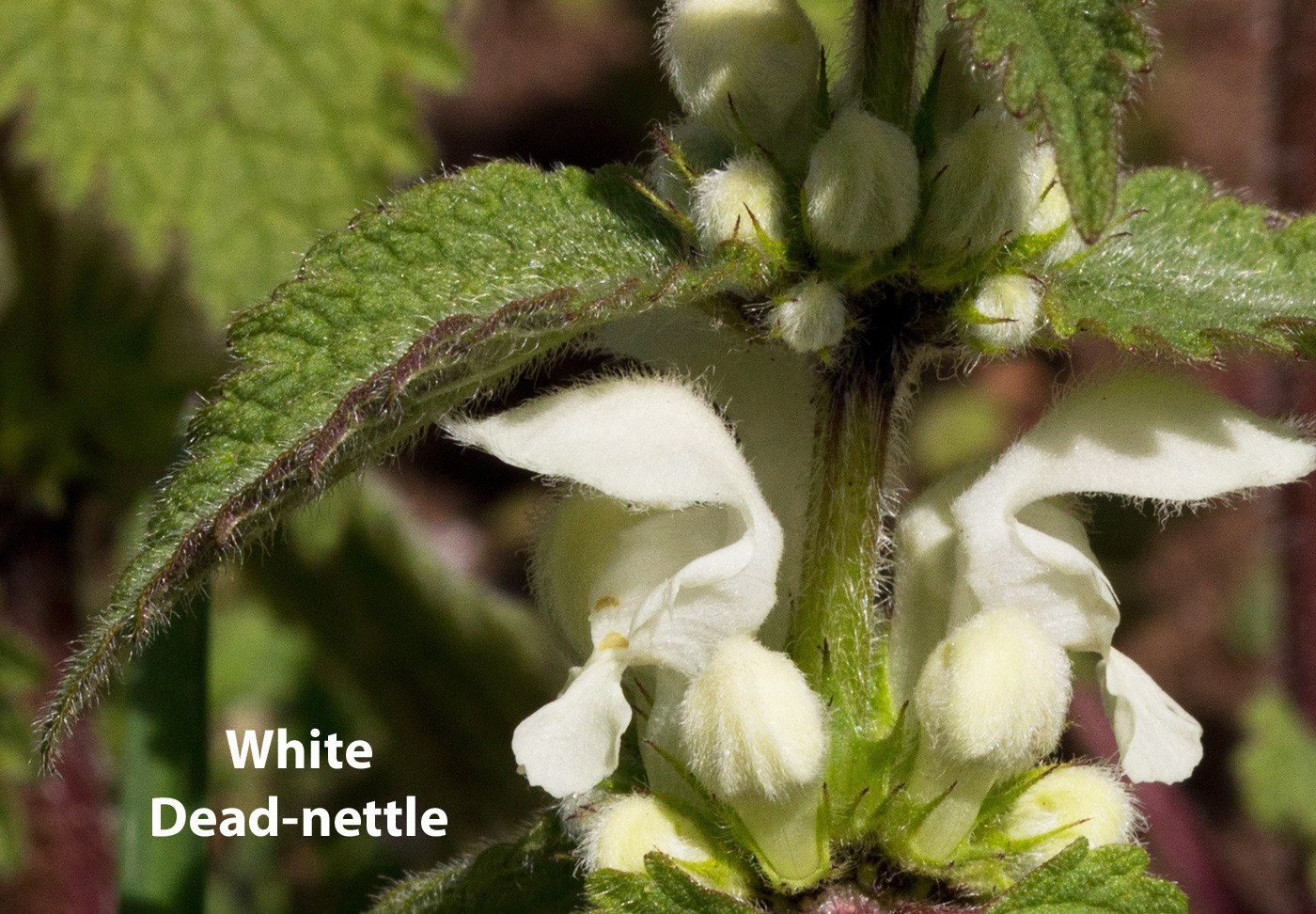 When the additional species from local seeds are added, the combined number that have been noted as growing in our wildflower area is close to 70, and this is without any systematic attempt to record every species and not including the less eye catching but equally important grasses.

So, from this few years experience, if you plant wildflower seeds, be prepared for differences year on year as the community develops and adapts to the local conditions, producing changes as different species emerge, flower and then establish a balance with the other plants. The relative abundance of the various species is a response to ecological interactions between them as they compete for light, water and nutrients and how they cope with the vagaries of our climate each year, especially long dry spells.

Seeing the Crow Wood bank as it has matured into a complex mix of individual species shows what can be achieved by fairly simple management, working from a good base of species. It is hoped that in future years it will still continue to give pleasure to many of the people passing by with the beauty and variety of flowers to be seen, as well as supporting a diverse pyramid of wildlife that will continue to develop from the broad base of plant diversity that has been created.

Future blogs will expand on this topic and will show some of the diversity of wildlife that these wildflower areas help to support and why this very small portion of restored wildflower "meadow" can be part of an important nework of similar sites helping to slow and reverse the recent losses in wildflowers and the biodiversity they support.

Some other small birds of woodlands and gardens

Birds in woodland and gardens

Some other small birds of woodlands and gardens

Birds in woodland and gardens